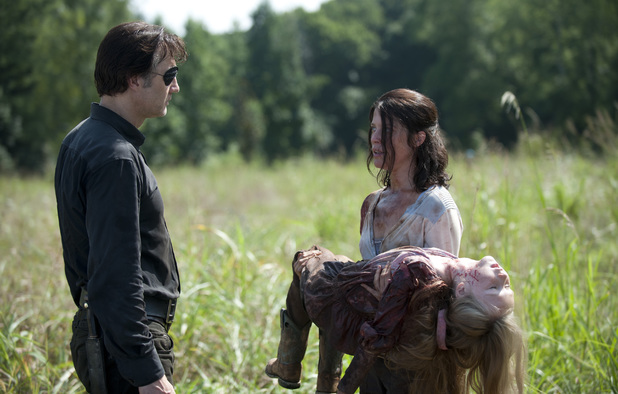 Back on The Warm Glow and back writing about The Walking Dead. Yay.

So, The Walking Dead has reached its midway point in what bizarrely is its fourth season. I say bizarre as I can scarcely believe that this undead melodrama has been going for four years. Often serialised dramas are hitting their stride; in many cases their zenith (The Wire, The Shield, The X Files as ones that strike immediately to mind) with the fourth series being the show’s high watermark, never to hit the same quality again. Yet with TWD I feel like nothing has really happened.

Don’t get me wrong, I’ve long since accepted that TWD is a 6/10 show that occasionally conjures up 9/10 episodes. The warning signs were all there from the ropey ending of the first season and the boredom atrocity that was the second season. Finally the experiment with constant action and be damned be with plot, characterisation and continuity hit the mark more often than in the past, but only as long as you didn’t pay attention too hard

Then, the elephant in the room. The ending of season 3. Having finally managed to craft something resembling a season long arc, a Big Bad beyond the ever present but agenda-less zombies, it blew it in the dampest of squibs imaginable. It felt downright insulting to have a 15 episode build up (the equivalent of 2 days at work) result in The Governor suddenly killing all his own troops (for……some reason. Always best not to ask the awkward questions  when watching The Walking Dead) and all his gang upping sticks and suddenly hanging out with Rick and co. The final shot of a cheesy sunset the icing on the cake of crap.

So season 4. A fresh start with Scott Gimple, responsible for many of those high points mentioned above, and thus, some fresh hope.

Despite a strong opening with a hilariously inventive set piece with zombies dropping through a rotting ceiling (say what you want about TWD, they are always coming up with fresh ways to kill zombies) which circumvented the show’s often troubling racial undertones by having an under written white character act as the  sacrificial lamb for once, 4.1 (is this how we label it? I can’t get on board with this half season malarkey) was underwhelmingly solid.

Around episode 4 I even began properly questioning why I continue to watch. The plague story was frankly pretty drab and suffered from issues of timing (the”away team” led by Daryl seemed in their scenes to have been gone a day or so, but it felt like weeks back at the prison). An increased focus on  characterisation was welcome but often felt staid and forced. Though I will reserve praise for the scenes with Michonne and the baby – TWD is often guilty of just having characters say their emotions as the only route of conveying them, yet without saying a word they brought real depth to the show’s most criminally underused asset.

However, with the return of The Governor and the mid season finale, it all clicked. The episode “Live Bait” marking the flash back of the Gov was a definite season high point and actually allowed David Morrissey to do some acting, shaping Woodbury’s psycho in chief into something resembling a character with a partial redemption story. Sure enough next week it all fell off the rails, but it makes The Governor out as a decent man who broken by grief just can’t control his urge for power and violence; as much a casualty of this apocalypse as anyone else we’ve met.

With the finale, while some things didn’t really add up (why did everyone trust this crazy dude who’d rocked up and started murdering everyone) everything made broad sense. Clearly the show had been written into a hole by the previous show runner, and Gimple had his own Myreenese Knot to solve.

No spoilers for Game of Thrones here, but authour George RR Martin has blamed the bloated nature of the last couple of books on the need to get a whole host of characters all to the same place and time to allow the story to progress. In the comics, the events of season 3’s finale result in the rough outcomes of season 4’s mid point finish. Basically, Gimple had to clear out all the bumph (the Woodbury extras, hence the plague), get The Governor back to the prison but also have us care about the characters to make the brutal events of “Too Far Gone” really sink home.

The events of “Too Far Gone” are lifted from the comics, in a devastating bloodbath which caused me to temporarily stop reading such was the bleakness. The show doesn’t quite hit those horrifying lows, but it came mighty close. The Governor of the comics is torn to pieces by walkers having been turned on by his own side in the chaos of the prison attack, but with the character work of the preceding episodes I felt the TV Governor’s end, dying alone having failed in his aims of taking the prison and keeping his loved ones safe yet again was far more fitting.

A particularly dull episode in the season featuring Herschel trying to save the player victims reaped its reward, in that I actually have a shit when his head was lopped off, and brought some gravitas to what could have all to easily slipped into nonsense.

And Daryl blew up a tank. Bad. Ass.

As a spectacle of television it was gut wrenching, and gives me genuine optimism for the rest of the season. With the shackles of past mistakes thrown off, there’s a chance for The Walking Dead to fulfill its potential. The new “on the run” format the trails have hinted at shows plenty of potential, and the site has always been strongest with small self contained stories.

There plenty of space for intrigue too; for my money I reckon that sociopathic young girl with all the empathy of Hannibal Lector was the one leaving rats and killed Tyresse’s missus with Carol covering for her. Also the big reveal: is Lil Asskicker still alive or was showing a mutilated infant too much even for The Walking Dead?

Either way, I’m actually interested to find out when the show returns, rather than just having a gap in my Monday evenings. Just, please stop blowing the chances I give you. Please?